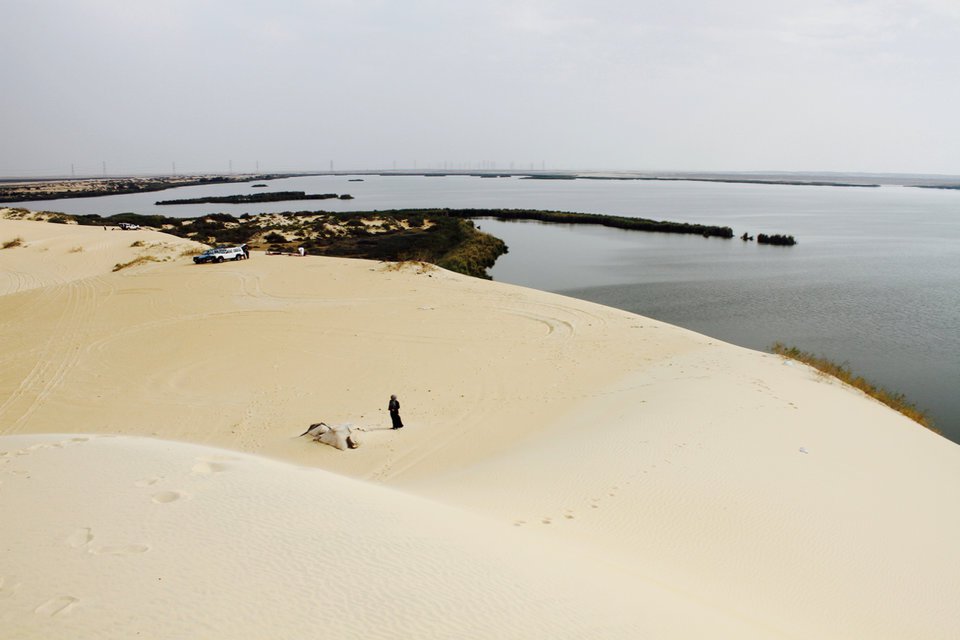 Do you want to find out more about an ancient desert oasis city? Are you looking for world class tourist attractions in KSA? Would you like to know all the best places to visit in Al Hasa? Is exploration of mountains and desert lakes on your bucket list? If so, then read this article which reveals the incredible diversity of a region hidden from the world.

While many people naively think the Eastern Provinces is just a big desert full of oil, Al Hasa offers a host of diverse attractions for the burgeoning Saudi tourist industry. If you’re in Saudi already, visit sooner rather than later to see the area ahead of the expected tourist hordes thought to be arriving soon. And don’t miss any of the six amazing attractions detailed below, they’re all so good! 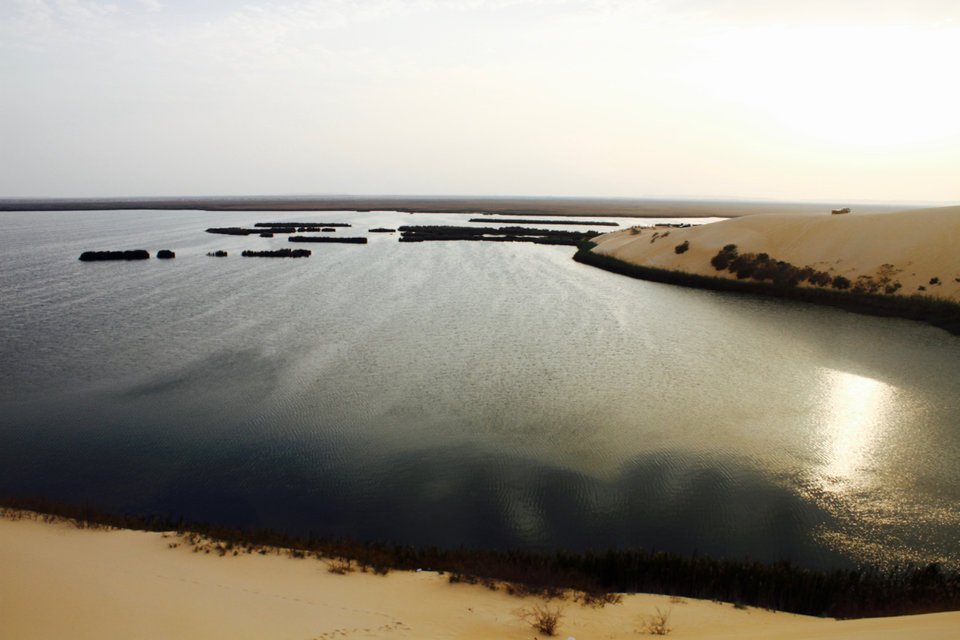 Al-Asfar Lake, otherwise known as the Yellow Lake, is situated 13km east of Al Hasa. Surrounded by perfect sand dunes and vibrant ferns, this huge lake is one of the most spectacular spots in the Eastern Provinces. While you definitely need a 4×4 vehicle to reach the place, cruising tiny lanes through a desolate desert is an attraction in itself. Once you get there, find a quiet spot to sit back in awe at an unexpected desert treasure. 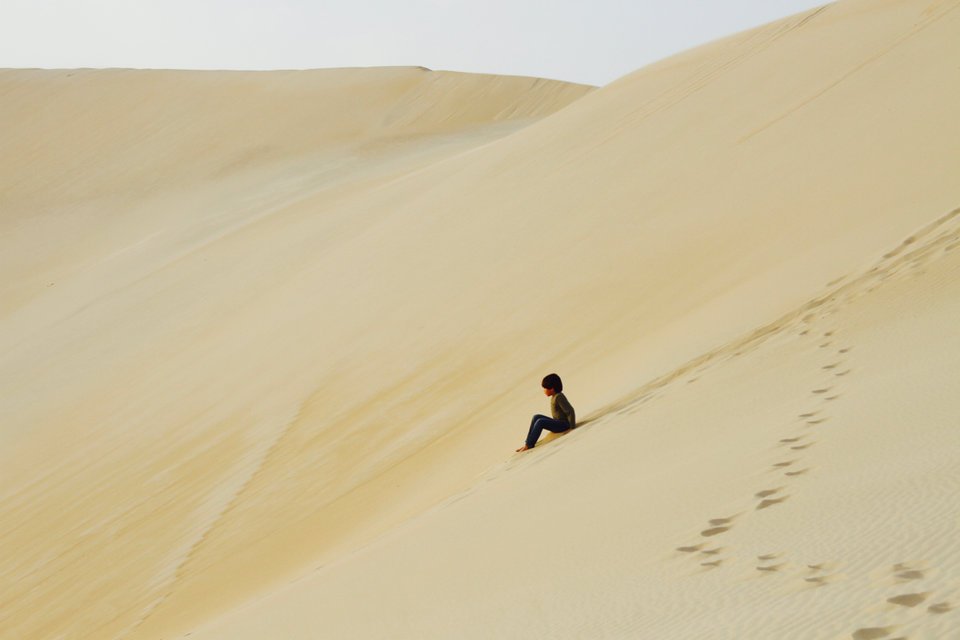 Recent rains made getting there more difficult than usual. Large areas of flooded desert forced our driver to take an extended route. My son Rafael loved the entire drive, shrieking with delight at the driver’s wide skids. It took around 45 minutes to reach the top of the sand dunes which skirt this incredible lake. While our Saudi host set up a fish kabsa picnic fit for a king, Rafael played with Hassan, his son. Soon enough we all sat down and enjoyed the delicious banquet and breathtaking views. The fresh fish was a real treat for my wife Mirasol, who loves seafood.

A few other groups came and went during our three hours there, including some determined drivers eager to impress with their dune driving stunts. However, for the most part it was peaceful and simply amazing to contemplate the years gone past when groups trekking the harsh Saudi desert must have stumbled upon this lake in utter disbelief. 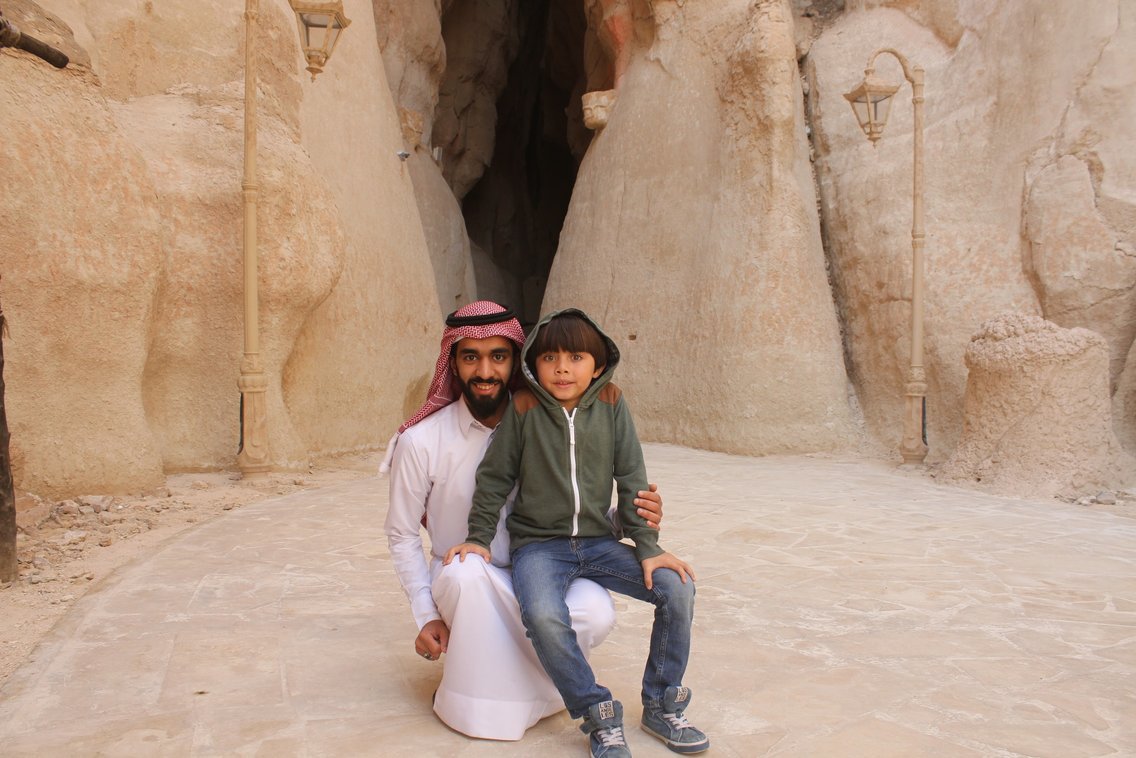 Al-Gara Mountain is probably Al Hasa’s most famous site. Situated about 10 kilometers east of the city, it stands about 75 metres above Al-Qarah village. Uniquely, the mountain hosts 28 tall linear passageways totaling almost 1 mile in length, called the Judas Caves by expatriate Filipinos. Dotted around the village are workshops of local traditional potters, who are known for the quality of their wares. In recent years Al-Gara has been radically developed by Saudi tourism into a cleansed area complete with a gift shop, cafe, concrete pathways, lights, and koranic scripture.

Huge date plantations and German-built irrigation canals dominated the short drive from the city to Al-Gara’s swanky new entrance. Once inside, a Saudi tourism representative showed us a short movie, gave us a free gift and directed us towards the entrance. We paid 30 SAR per person entry fee and walked along a pathway towards the caves.

Ahead of any other visitors, we explored the extensive network of caves for a couple of hours. Although the concrete pathway and extensive lighting made it easy to get around, the area had clearly lost its otherworldly appeal. Models depicting key koranic stories, including Noah’s Arc and rods turning to snakes, provided a bit of entertainment on the path out of the complex. Unsurprisingly, there was no mention of the myth that Judas Iscariot commited suicide in these caves. It would have been interesting to read any evidence that Judas trekked all the way from Jerusalem to Al Hasa to escape his guilty conscience. 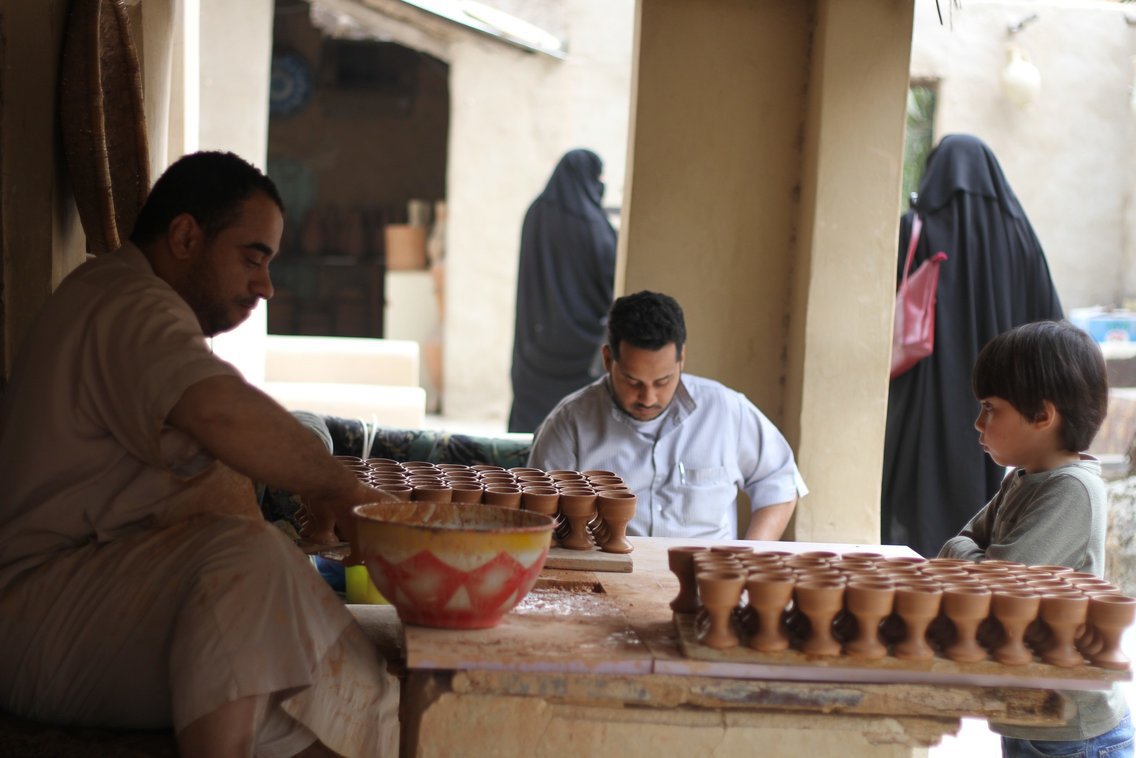 Seems like if you’re in the Al-Gara Mountain area, it would be a shame not to visit a local pottery place. Not far from the Al-Gara cave complex, we stumbled upon a beautiful, traditional pottery making place called Dougha. Fascinated by traditional potters crafting their wares, Rafael spent ages watching and learning from them. 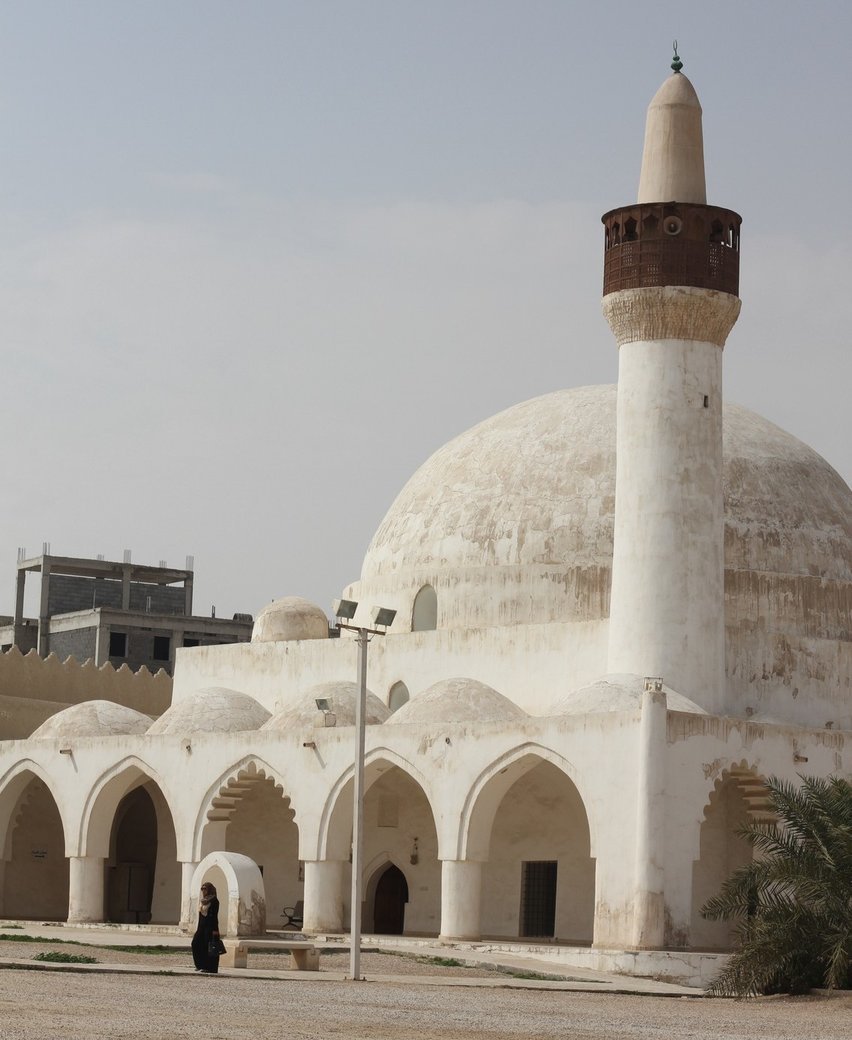 Ibrahim Palace is an incredible piece of historical architecture in a Kingdom determined to cleanse itself of the past. Hundreds of years ago, it was a Turkish military barracks and the main headquarters of the Ottoman garrison in Al Hasa. The center of the palace, which was built in 1556, is the stunning Al-Qubba mosque. Rarely do you find anything as old and beautiful as this mosque in Saudi. Turkish baths, a prison and a weapons storehouse were later built around it. The Palace covers an area of 16,500 square meters and conflates military and Islamic architecture.

Probably the most instagrammable location in Al Hasa, we spent an hour wandering around the courtyard capturing this ageless wonder from every angle. Sans tourists and traffic, it allowed us to take a authentic trip back in time all by ourselves. We highly recommend checking out this place if you’re in the area. 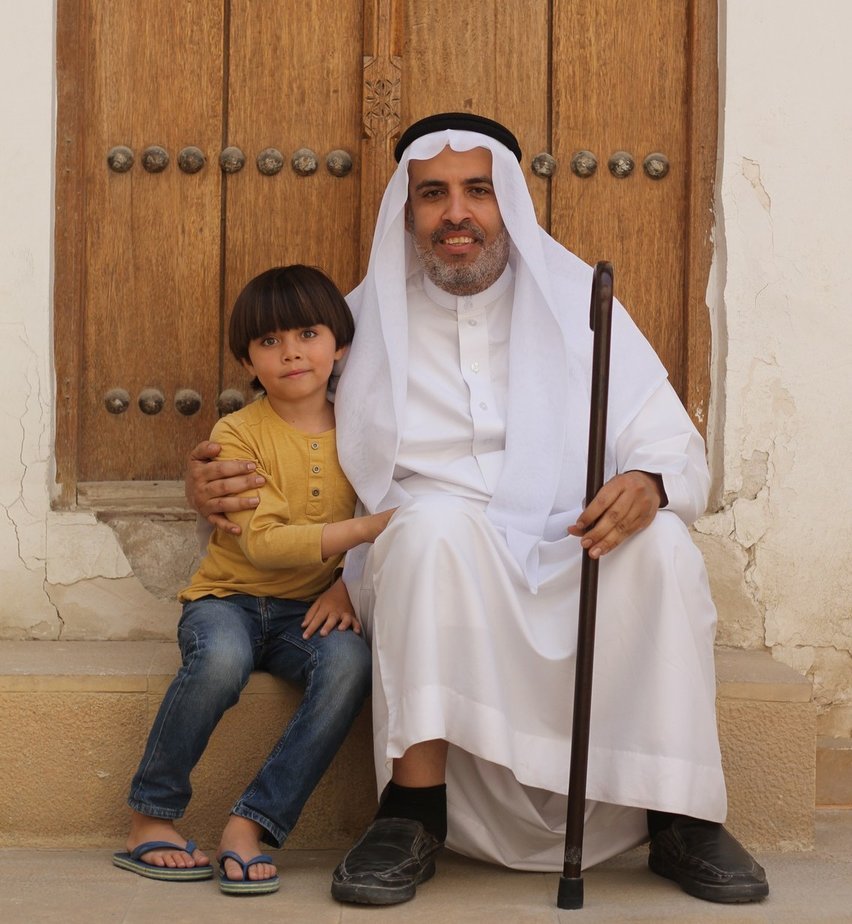 Situated in the heart of downtown Al Hasa, Bayt Al-Mullah offers a chance to see the room where King Saud slept after he captured Al Hasa in 1913. Built in traditional Arab style and decorated with old paintings and historical relics, Al-Mullah house is a great spot to enjoy a slice of Saudi history. 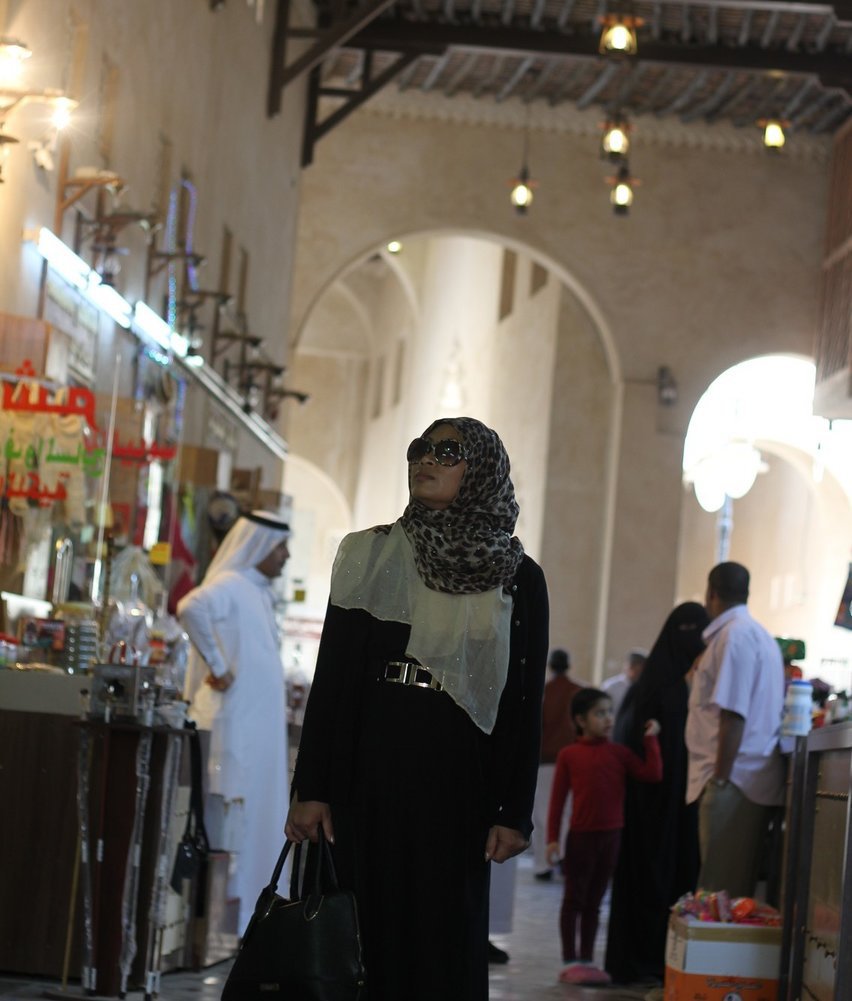 One of the oldest markets in the Eastern Provinces, the souq contains over 300 shops. In comparison to Jerusalem or Marrakech, it’s not that exciting. Nevertheless, we enjoyed a couple of hours here trying locals dates, smelling delicious spices and browsing through colourful abayas.

– If you want a budget place, stay at Lyaly Al-Sharq Furnished Apartment where prices start at 150 SAR/US$40. Book using Agoda or Wego. We stayed here two nights and found it comfortable and conveniently located.

– If you feel like a splurge, check in at the Intercontinental Hotel where prices start at 586 SAR/US$156. Book using the hotel’s own website, Booking.com or Agoda. 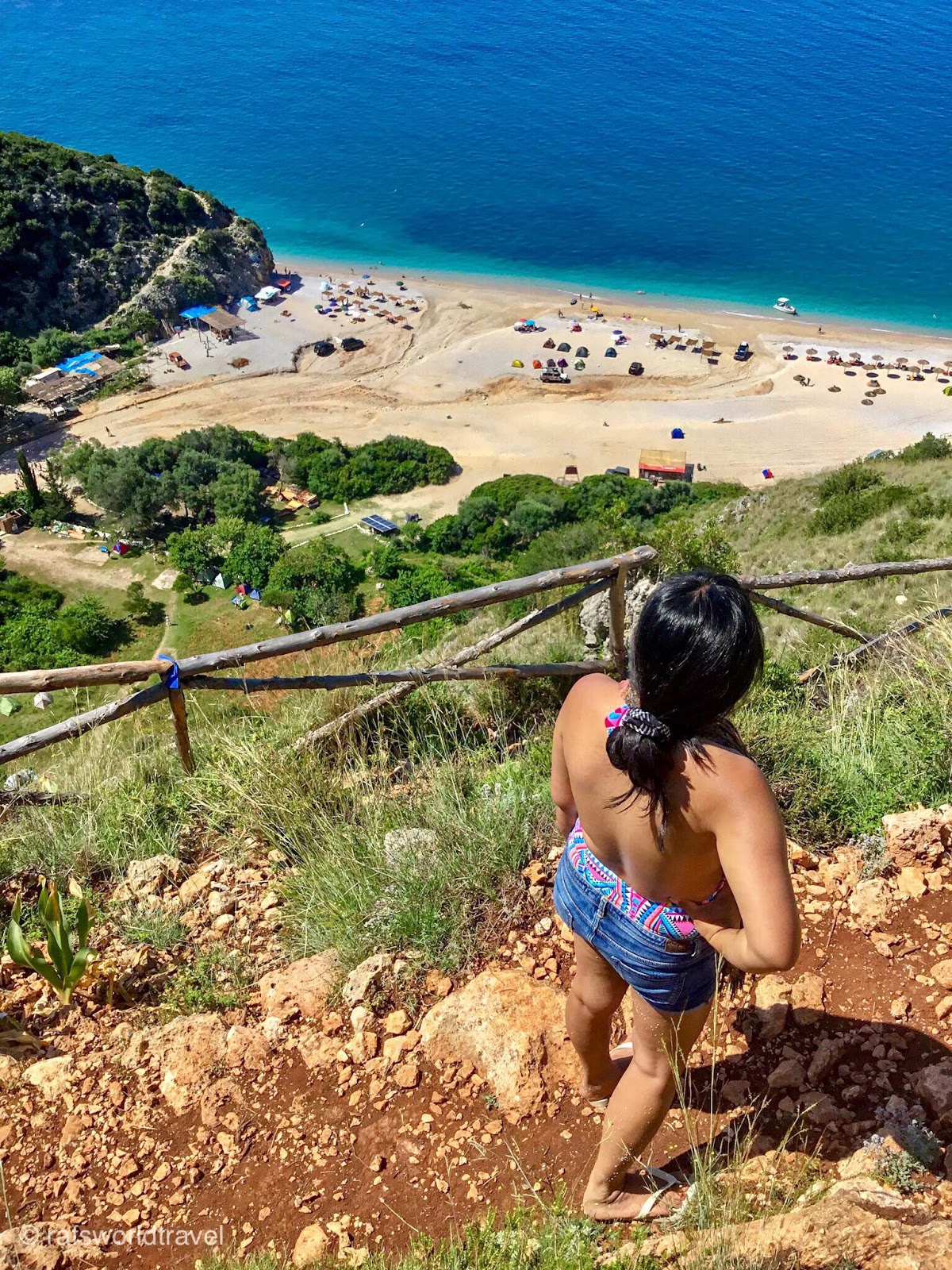