Would you like to go on an adventurous trip from Singapore’s skyline to Thailand’s famous beaches? Do you want to see more of Malaysia and Thailand’s hinterland? Can you handle sleeping on a night train? Do you want to explore a less-traveled route through Southern Thailand? If the answer to any or all of these questions is yes, then read all about our train-dominated family trip from Singapore to Hat Yai, via Kuala Lumpur, and back again to Singapore via Kota Bahru.

Our journey began in Bulacan, Philippines, where a typhoon passing over the city had dumped so much rain that the journey to Manila’s airport became eventful in itself. Huge pools of water slowed the jeepney to snail pace speed as we traveled from flood-affected Meycauayan City towards Monumento; the most northerly MRT station in the Philippine capital. Eventually we got there and traversed the entire city to Baclaran MRT. From there, we picked up a cheap taxi to the airport. Two hours later, Air Asia called us forward to board the short hop from Manila to Singapore: the real beginning of our Southeast Asia adventure.

Upon arrival in Singapore, we swiftly boarded the metro at Changi Airport to Woodlands MRT station. Next, we took a bus through the border with Malaysia. It was Friday evening and the traffic was horrendous, but we made it to Johor’s bus station with easily enough time to catch the night bus to Kuala Lumpur. We arrived at KL’s bus station at 3am, so decided to utilise the in-house hotel which offered 24 hours in a box room for US$25. Interestingly, they checked our marriage certificate at the hotel even though we had our son with us. Whilst it wasn’t the most comfortable hotel, it allowed us to re-energize for the onward journey to Hat Yai.

Around lunchtime, we finally emerged from our box and filled up on appropriately unhealthy fast food. We also shot some family and solo photographs in the huge station complex. Stations really are ideal photo shoot locations with great light and interesting backdrops. Weighed down somewhat with luggage, we decided not to explore the city itself. We had enjoyed Kuala Lumpur’s highlights two years before. Instead, we jumped on a train bound for central train station and waited a few hours for departure of the night train to Hat Yai. 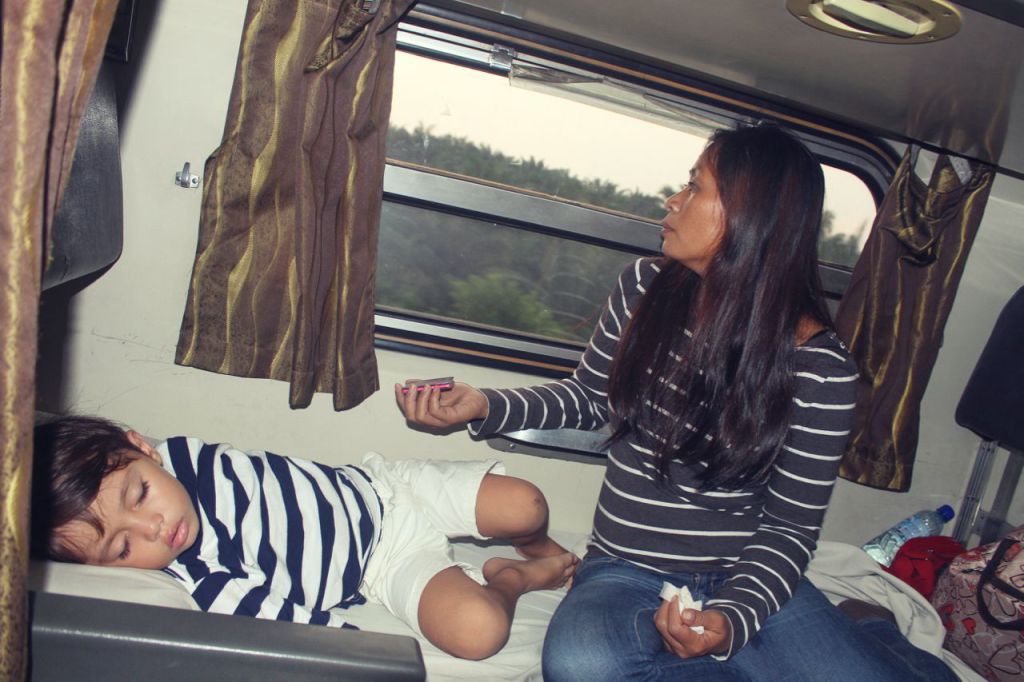 The Overnighter to Hat Yai

At 10pm, the Hat Yai bound train finally pulled into KL’s bustling central train station. Fortunately, platforms and incoming trains were well signposted, so we easily found the stairs to the right platform. Overcome with tiredness, the sleeper compartment tickets seemed like gold when we located our comfortable beds for the 12 hour journey ahead. We found the dining car too and loved seeing KL’s skyline iconic towers drift by while snacking on basic noodle fare. The well-equipped train made travel a joy compared to a bus or plane: a relaxed dining experience, sleeper compartments, and the unique opportunity to revel in a country’s scenery feeling totally comfortable. Anyway, after a solid night of sleep we completed border formalities at Malaysia’s border, then stayed on the train until it arrived at Hat Yai. Our Malay-Sing-Thai train tour paused for a few days, as we raced to the coast by van to our main destination: Krabi.

Into the Conflict Zone

A few days later, a van dropped us back in Hat Yai for a night at the perfectly located 4 star Centara Hotel. Situated right in the heart of town, it enabled us to walk to the train station the next morning for departure to Sungai Kolok. The relatively heavy military presence, an old-fashioned train with large windows for fresh air travel and friendly fellow passengers, made this four hour journey the most special of our trip. Thrust off the tourist trail, we felt completely alive as the villages and towns of Southern Thailand rushed by. Perhaps put off by occasional bombings and shootings on the train line, no other tourist joined us for this portion of the trip. Off the beaten path travel into conflict zones isn’t for everybody, so please check government advisories about the situation before you travel to Sungai Kolok. 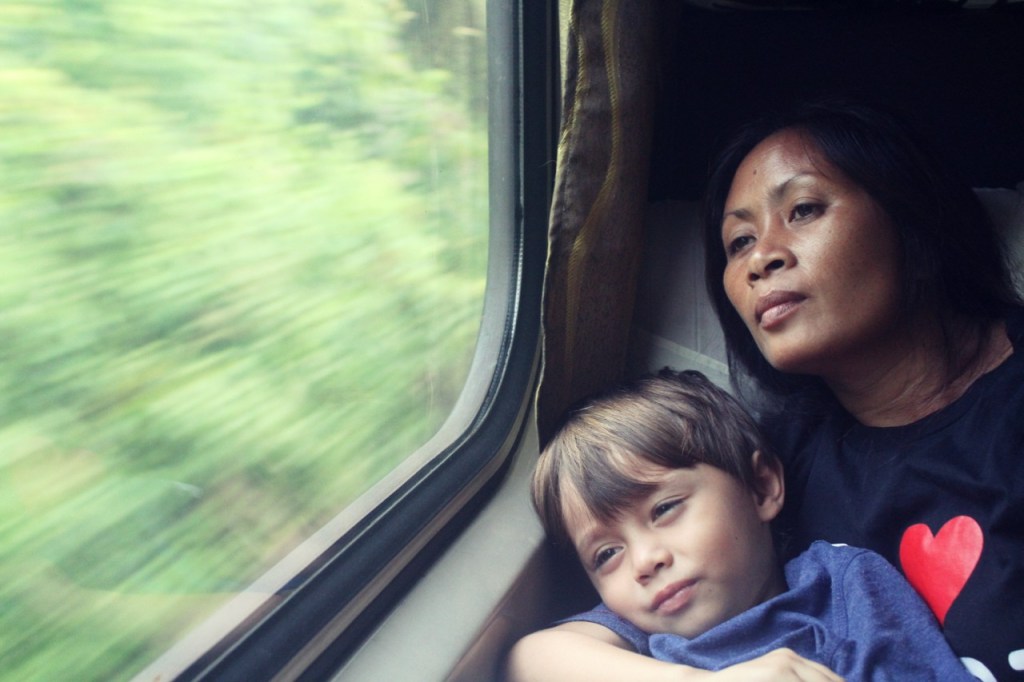 Once we arrived at Sungai Kolok, we literally walked over the frontier into Malaysia, got our passports stamped, and grabbed a taxi to Khota Bahru. Originally we had planned to take the daytime jungle line train the following day, but the hostel manager in Khota informed us it wasn’t running. Left with no choice, we re-booked our tickets for the evening departure to Johor and used our hostel for a day resting spot. We explored the downtown area a little and found the city incredibly similar to Saudi Arabia, unsurprising for the most Islamic city in Malaysia. Massive mosques dominated the skyline and the call to prayer boomed out of the speakers at sunset. 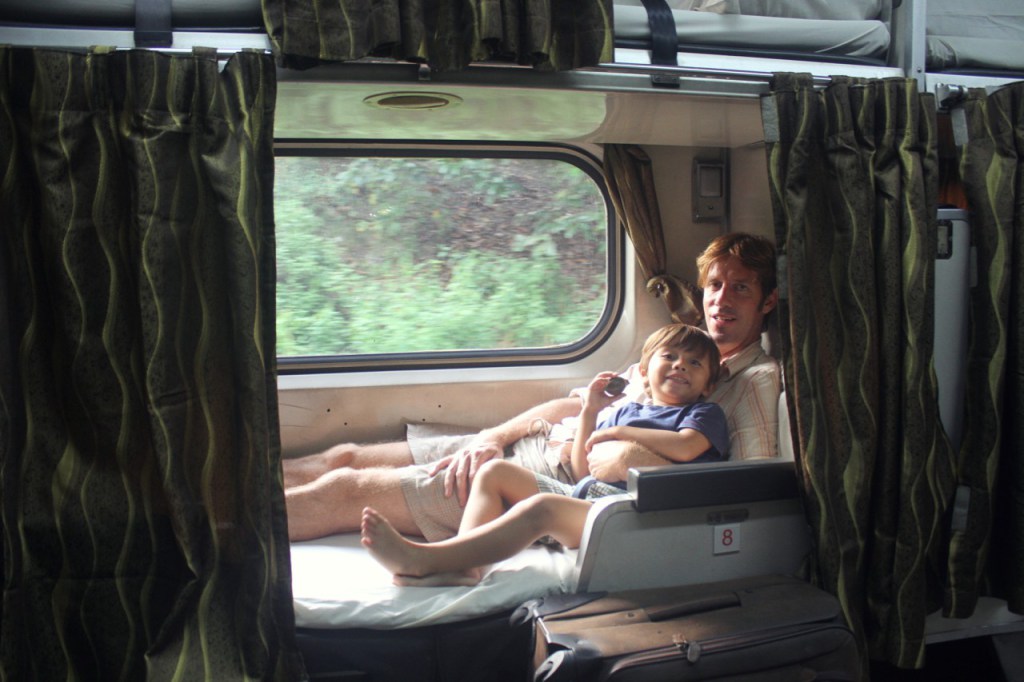 Early evening, we took a bus over to Khota’s out of town train station and boarded the night train through the jungle. Whilst we definitely slept through the most spectacular scenery, early morning light revealed amazing jungle for a couple of hours before civilization reappeared outside Johor. After a fast moving whistle-stop tour across Malaysia and Thailand, it was time to slow down. We checked into the 3 star Sentral Hotel, swam in their pool, ate from a sumptuous Ramadan buffet, and relaxed in a relatively grand room with sweeping views over the island of Singapore. The next day our vacation ended with an afternoon at the spectacular Singapore Zoo, a final train to Changi, before an inconveniently timed 2am Air Asia flight transported us back to all too familiar Manila. 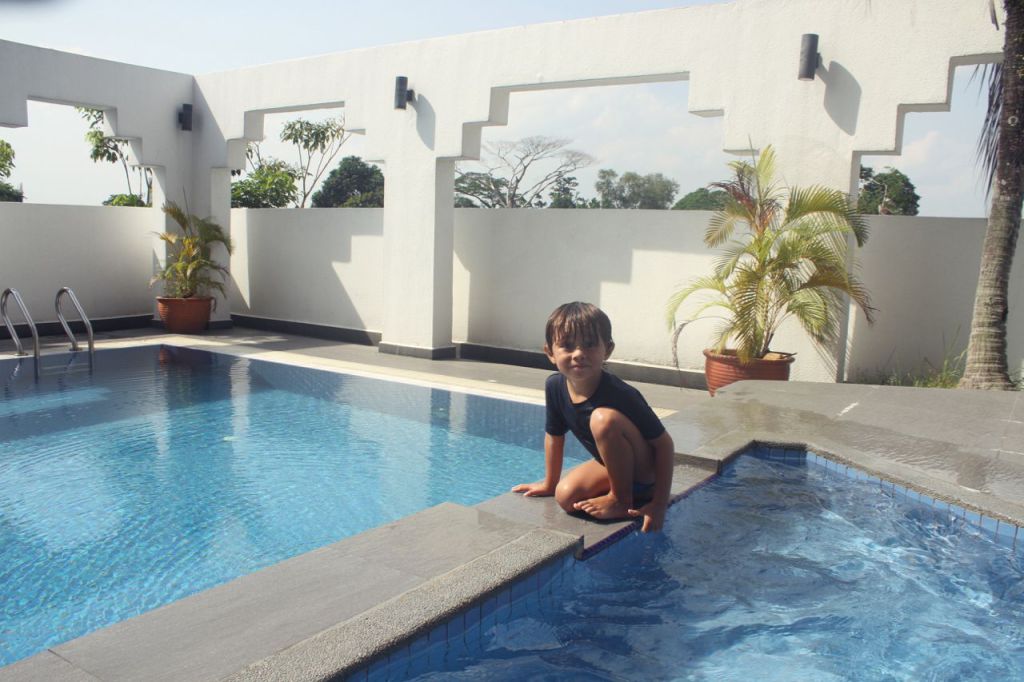 You can book all Malaysian and Thai trains using 12go.asia, a reliable travel agency which allows you to print your own tickets online.

Check www.train36.com for the latest schedules and prices between Kuala Lumpur and Hat Yai.

Check www.seat61.com for the latest schedules and prices between Singapore and Kuala Lumpur.

Check www.train36.com for the latest information about the Hat Yai to Sungai Kolok route.